A Global Recession Connects California to the World

In 2010, Nicolas Berggruen and Nathan Gardels sat down with a group of scholars, business leaders and political veterans in California to contemplate the economic and political stresses caused by the global financial crisis, the widespread perception of failing political institutions and Western democracies, and the question of how China’s rise would affect international cooperation and governance in the 21st century.

The tentative ideas that emerged from those original discussions became the foundation for the Berggruen Institute through the launch of local and global initiatives and the publication of Intelligent Governance for the 21st Century: A Middle Way Between West and East, a Financial Times “Best Book of the Year.”

This work began with proposing and implementing new ideas of effective governance through the 21st Century Council, the Council for the Future of Europe, and the Think Long Committee for California. Through these projects, the Institute worked closely with German and French labor ministers to develop a youth jobs plan for Europe; organized repeat delegations of government and industry leaders in a meeting with Chinese President Xi Jinping, Premier Li Keqiang and other Chinese leadership to foster an open dialogue and better understanding between China and the West; and passed the California SB 1253 Ballot Initiative Transparency Act, strengthening the integrity of the state’s initiative process.

In January of 2014, the Institute created The WorldPost, a not-for-profit, online global publication gathering top editors and first-person contributors. In 2018, The WorldPost began publishing global content exclusively on The Washington Post platform.

Concurrently, the Institute formed a new partnership with the University of California Press to publish a new book series on the great transformations.

In 2015, the Institute expanded its mission with the creation of its Berggruen Fellowship Program, which sponsors thinkers working to develop new ideas for addressing the great transformations. The Institute has launched resident fellowship programs at several universities, including Stanford University, Harvard University, NYU, Cambridge and Tsinghua University in Beijing. So far, more than 60 scholars have been awarded Fellowships. Starting in 2018, the Institute has also begun a new fellowship track that embeds researchers directly in laboratories and organizations.

The Berggruen Institute is an operational rather than grant-making nonprofit. As a matter of policy we do not pay overhead or other indirect costs on institutional grants and gifts. 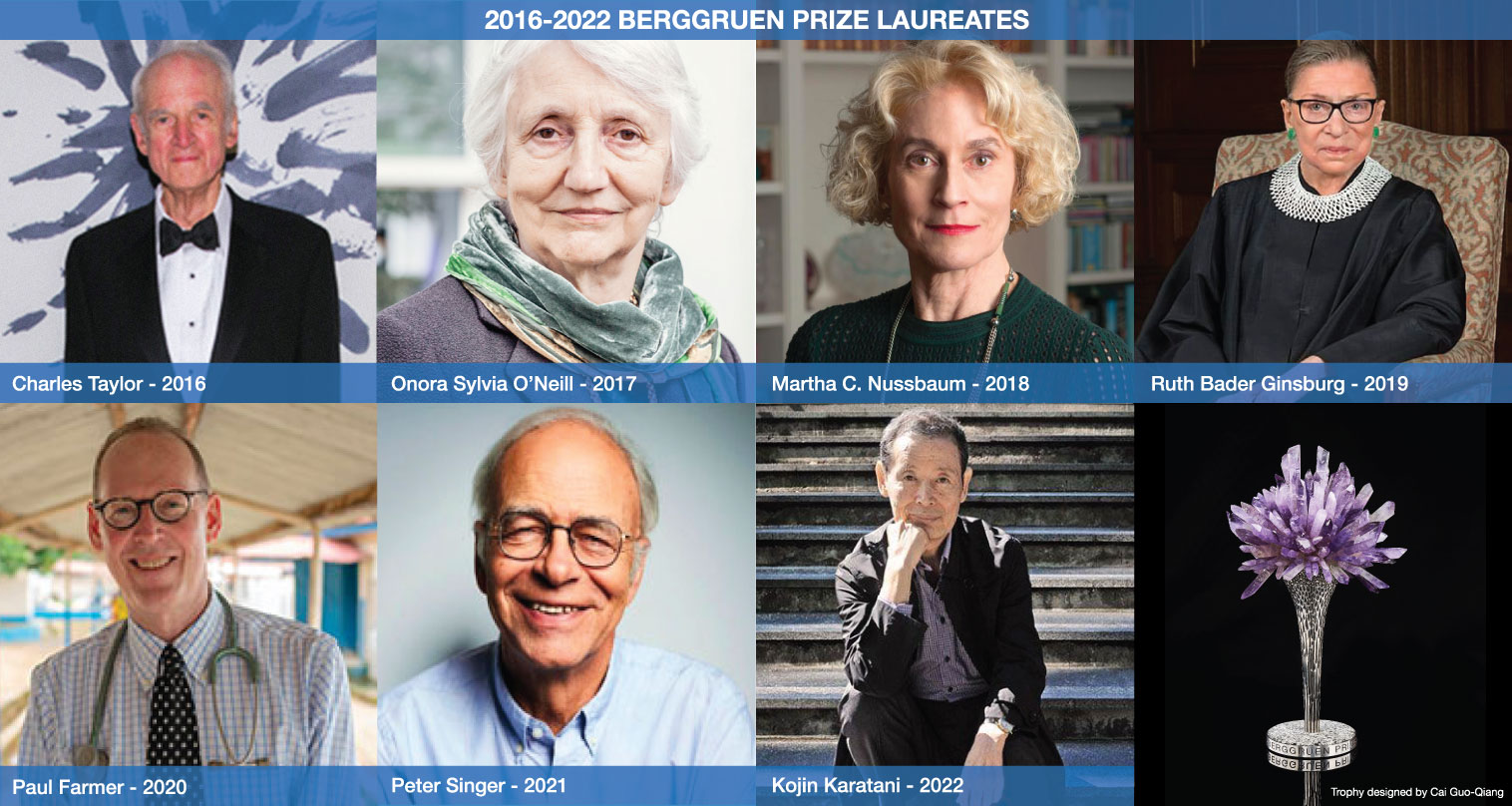 The Berggruen Institute presented its first Berggruen Prize in Philosophy and Culture in 2016. The million-dollar award, chosen by an independent jury, is given annually to a thinker whose ideas are of broad significance for shaping human self-understanding and the advancement of humanity.

• 2016 Laureate – Charles Taylor was the inaugural laureate in 2016. Taylor is one of the world’s foremost philosophers and is a global leader in deepening the understanding among different intellectual traditions and civilizations. He is influential throughout the humanities and social sciences and in public affairs.

• 2017 Laureate – Onora O’Neill is a broad-ranging philosopher of politics and ethics, international justice, and bioethics. She is a Professor Emeritus of Philosophy at the University of Cambridge and the former chair of the Equality and Human Rights Commission in Great Britain.

• 2019 Laureate – Ruth Bader Ginsburg is a lifelong trailblazer for human rights and gender equality. As a U.S. Supreme Court Justice, she has been a constant voice for justice, equal and accessible to all.

• 2020 Laureate – Dr. Paul Farmer is a medical anthropologist and co-founder of Partners In Health recognized for his pioneering work in connecting the philosophical articulation of human rights with the practical pursuit of health.

• 2021 Laureate – Peter Singer is a prominent thinker known for his widely influential and intellectually rigorous work in reinvigorating utilitarianism as part of academic philosophy and for shaping animal rights and effective altruism movements.

• 2022 Laureate – Kojin Karatani is the first Asian laureate of the Berggruen Philosophy & Culture Prize, a rare thinker whose ideas move across philosophy, literary theory, aesthetics, linguistics, economics, and politics—East and West; past and present.

In 2017, the Institute began to develop a much more robust and integrated approach to programming, coordinating the internal work being done by Institute staff with the work of its Fellows, with a view to generating pathways to understand and address the challenges and opportunity presented by the great transformations, focusing in particular on the Transformations of the Human, the Future of Democracy, the Future of Capitalism and the Future of Geopolitics.

The Institute has committed $25.5 million to establish the Research Center, which will provide a fellowship program dedicated to the cross-cultural and interdisciplinary study of the transformations affecting humanity, will include house program activities such as lectures and symposia and will present a schedule of public events. Because of its location in Beijing, the Research Center will engage China’s most outstanding thinkers to examine, share and develop ideas to address global challenges.